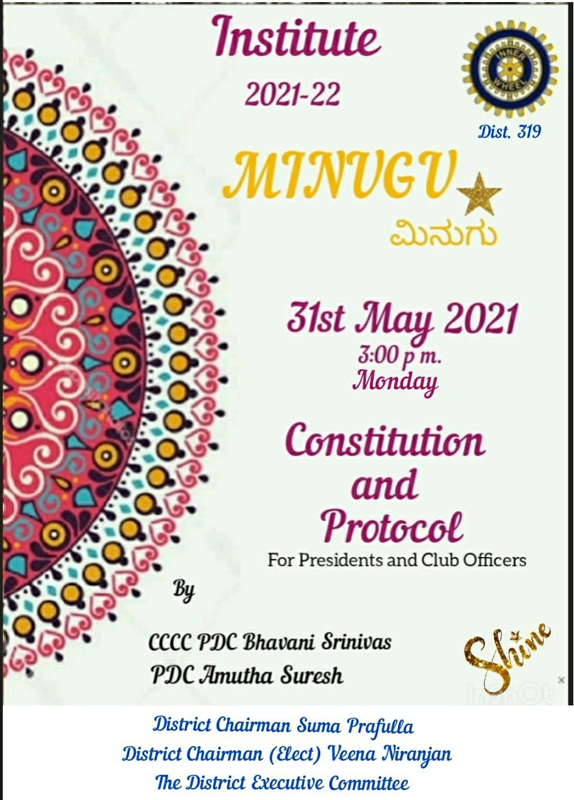 Minugu – means Let’s Shine.Our District Chairman Elect Veena’s motto was everyone should Learn and Shine. Hence this was an apt name given to Institute of Club Officers which started on 31st of May. It was spread across 6 days with meticulous planning of course material for each officer.The meeting was called to order everyday by District Chairman Suma Prafulla.The day began with a beautiful prayer by a musical instrument played by Chairman Elect’s daughters Nidhi and Neha and then the InnerWheel Prayer was recited.The respective trainings were held by the Past District Chairmen .Each day was colour coded and the delegates left with a graduation hats at the end.
The vote of thanks was given by District Vice Chairman Vinutha Harish everyday and the meeting was adjourned by District Chairman Suma Prafulla.

The Key highlights of each day are put below.

Day 1 : A briefing on InnerWheel Constitution and Protocols

No of Delegates – 185 delegates – 168 Club officers, 11 Dist EC, 6 Past District Chairmen
This was the day when our Constitution and Credential Committee Chairman Bhavani Srinivas along with Past District Amutha Suresh gave guidance on Constitution and InnerWheel Protocol to all the Club Officers about the InnerWheel.
CCCChairman Bhavani gave a deep insight into the following points.

There was a Question hour followed by the training where the mentors cleared doubts of various questions put forth.This was followed by Tambingo a game which was thoroughly enjoyed by all the officers.

President the crown of the club – one who leads the club with the best throughout the year.It started with the InnerWheel prayer.

District Chairman Elect Veena Introduced her team of Presidents by calling them the Sitare Presidents
The training for Presidents was conducted by Past District Chairman Sobhana Ramesh in a very immaculate manner. Sobhana presented her views with a powerpoint presentation and trained them to the T.

The following points were covered by her in detail

There was an interactive question hour where Past District Chairman Sobhana answered questions patiently and cleared doubts. A nice game was presented at the end which was very refreshing and left everyone with a optimistic outlook to start the new year

No of Delegates – 94 delegates – 67 President and Secretary Elects, 11 Dist EC, 6 Past District Chairmen

There was a wonderful exchange of ideas,thought provoking discussions and questions and answers handled by Past National Editor Renu Iyer.
The whats app emoji deciphering game played by District Secretary Rekha was innovative and full of fun….

No of Delegates – 91 delegates – 74 President and Treasurer Elects , 11 Dist EC, 6 Past District Chairmen

The treasurer – who controls, allocates, plans and regulates funds of the club with the consent of the President in a club is a very responsible post as a Club Officer.

An open house was the most important feature where where the treasurers discussed how to handle online payments and bank transactions during the Covid times and gave tips which showed a healthy camaraderie.Auditing accounts was discussed in detail.
An interactive game was played at the end by District Treasurer Srimathi Master.

No of Delegates – 84 delegates – 57 President and ISO Elect, 11 Dist EC, 6 Past District Chairmen

ISO stands for International Service Organiser. The club ambassador for friendship, fellowship and service to the outside clubs. She plays a pivotal role in guiding you for execution of joint projects and fellowship at the interclub, inter district and international inter club level. However there are some protocols and some ground rules which an ISO abides by and some learning which goes into it to justify the role. The task of guidance for the same was taken by Past District Chairman Padmini Nagachandra.The session begin with the District ISO Rajni Gowda had a unique way of introducing the Club ISO’s with a friendship in different languages.Past District Padmini Nagachandra took over the session by getting into her role.

A healthy discussion on how to go about Inter District and Inter Country Project was a highlight brought to focus in the questions answer session. A game full of friendship on our ancient religious mythology was conducted by District ISO Rajni, and it ended it with songs on friendship sung by all the club officers.

Day 6 ; Institute for the Editors

No of Delegates – 88 delegates – 71 President and Editor Elects, 11 Dist EC, 6 Past District Chairmen

Editor is a person who is responsible for showcasing the club activities and giving visibility to the organisation by her bulletins, newsletter and journals.She is the recorded encyclopedia of the club activities.How to make a Newsworthy bulletin and the importance of being an Editor was the main feature of the Editors Institute. The mentor for this session was Past District Chairman Rekha Babu. She started with a puppet show which highlighted the importance of the Editors role.She presented a slide show on defining a bulletin. The key points for the same were

The interactive session was very interesting and a focus as in today’s circumstances and to make the world eco friendly was ebulletins. An alternative was suggested to the editors who still love the power of pen
A competition on Pen it Scan it and Email” was announced by District Editor Ishita and thereafter a small quiz on how a picture speaks, how to tell a story in five lines and making of words put forth and the delegates had a fun time.